I have been advocating for some time that people use 64-bit versions of SQL Server 2005, and above, since the biggest barriers to its adoption, namely lack of hardware support, have largely been removed. All server-grade processors released in the last six-to-seven years have native 64-bit support. The other major obstacle, lack of 64-bit drivers for hardware components such as NICs, HBAs, and RAID controllers, is not really an issue any more, as the advent of 64-bit Windows Server 2008 R2, in 2009, has meant that 64-bit drivers are much more readily available for nearly all devices.

You can confirm if your processor has x64 support by running CPU-Z and looking at the Instructions section on the CPU tab. If you see EM64T (for Intel processors) that means it does have x64 support. Unless your processor is extremely old, it will support x64. 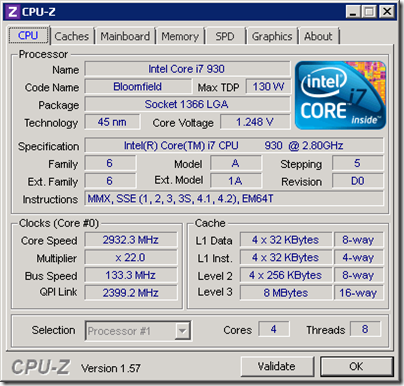 One sticking point, and the bane of many a DBA’s life when it comes to upgrades, is third party databases. Some common reasons for still using an x86 version of Windows Server include:

It is also very likely (but not officially decided or announced) that SQL Server Denali will be the last version of SQL Server to have x86 support. It has already been announced that there will not be ia64 support in Denali.

I am one of the lucky ones; at NewsGator, we have no 3rd party databases in our production environment, and we are a 100% Microsoft shop so all of the applications that use my databases use the ADO.NET Provider. As a result, NewsGator’s production SQL Server environment has been 100% 64-bit since April 2006.

This entry was posted in Computer Hardware. Bookmark the permalink.